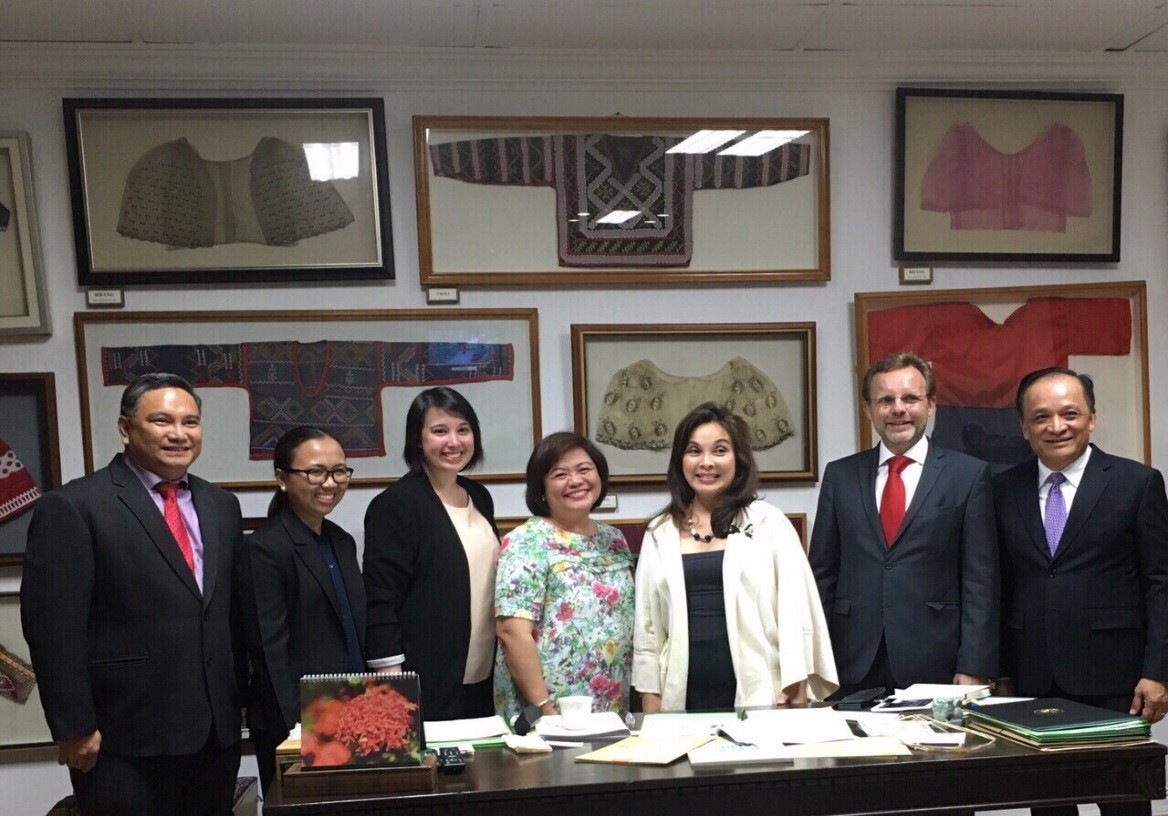 The first courtesy visit was held at the Senate with Senator Legarda, whose landmark laws include Environment Laws, Law on Disaster Risk Reduction and Resilience, Agri-Agra Reform Credit Law, and Laws on Employment Generation. A staunch advocate for the protection and conservation of the environment, Senator Legarda was impressed with the CSV programs of Nestlé, notably its commitment to achieving zero-to-landfill. She noted that this commitment is beyond what is required of the Ecological Solid Waste Management Act that she herself authored and passed in 2000. Jacques and the Corporate Affairs team presented the two most recent solid waste management initiatives to Senator Legarda— the waste laminates to eco-bricks project and BEAR BRAND’s upcycling project. The senator lauded Nestlé’s recycling prospects and confirmed her intention of building an eco-school building made of eco-bricks in Malabon. She also requested Nestlé to consider a list of schools that she has worked with as potential beneficiaries of BEAR BRAND’s Lakas Tibay chairs.

The visit with Senator Gordon, CEO and Chairman of the Philippine National Red Cross, allowed the Nestlé team to observe the mobilization of the network of resources at the PNRC

Command Center (such as equipment, transport, hospitals, blood banks, doctors, nurses) during calamities. The PNRC organization is disaster resilient, as described by Senator Gordon, and has a pool of 40,000 volunteers ready to be mobilized at any given time. Nestlé has been supporting the Red Cross for many years now.

Senator Cynthia Villar, on the other hand, shared with the Nestlé team her various programs, especially those run by the Villar Foundation that she founded and chaired. These programs include livelihood projects for OFWs, livelihood centers in more than 800 locations nationwide, environment protection, health and social services, youth education, and sports development. The Foundation also talked about its progressive and award-winning cooperatives nationwide, which Nestlé may tap for the NESCAFÉ Plan.

To align with the new government on the NESCAFÉ Plan program, Jacques and the Corporate Affairs team gave the new Department of Agriculture Undersecretary for High Value Crops Development Program (HVCDP) Evelyn Laviña and her group an overview on on Nestlé’s operations in the Philippines and a comprehensive presentation on its CSV objectives and the NESCAFÉ Plan’s initiatives on PPP (Public Private Partnerships)in the agricultural sector from 2010 till the present. Undersecretary Laviña responded positively to the the NESCAFÉ Plan and how Nestlé has actively contributed to the development of the robusta coffee industry in the country. will also use residue from production as fertilizer. Spent grains from barley residuals, which have nutritional values, will be used for animal feeds.