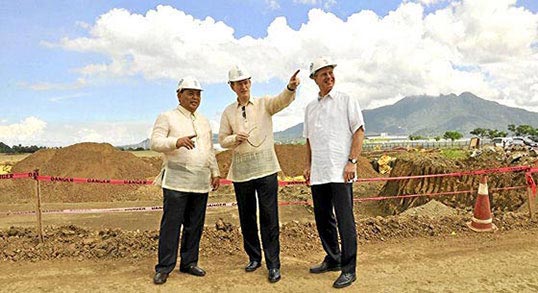 Not all chief executives saw themselves at the helm of a company when they were but teenagers who were about to enter college. Nestlé Philippines Inc. chair and chief executive John Martin Miller certainly had no idea that he would be on the upper echelons at one of the world’s largest manufacturers of fast moving consumer goods.

An English literature and geography major from the University of Durham in England, all he had when he started his career in the 80s was a broad vision of what he wanted to do with his life.

"I did not see myself then as an executive. I had a broad vision of where I wanted to go. I’ve always wanted to work internationally, and that’s what I’m doing now. You shouldn’t have a too-specific idea of where you want to be, as that will restrict you," he shares in an interview with SundayBiz.

Entering the world of business as a management trainee for a multinational company after earning his degree, he had no qualms about being unable to deliver what the job required of him, despite his lack of hard-core business know-how.

"I have no business qualifications, aside from my years of experience in business now. There weren’t that many business schools when I was growing up," he relates. "But education is not so much what you study but how you study."

Starting from the bottom

Although he did not take a business course in college, Miller did have some exposure to business—at least the manual labor side of it—when he was growing up.

His father was in the frozen food business and he helped re-arrange freezers from time to time. He also took on summer jobs during school breaks, the first one being as a shelver at a liquor store in England.

"I earned 33 pence (around P22.50, using present-day conversion rates) an hour, which wasn’t very much. It was a vacation job when I was a teenager," he recalls. "I also worked in a silkscreen printing factory. That was before I started university."

Today, after more than three decades of working for various companies, most of which were multinationals, he no longer had to do any heavy lifting, shelving, or freezer re-arranging. The challenges he had to face, however, were no less easier to deal with.

Aside from day-to-day job demands, Miller also had to learn to adapt to various cultures—most of which were as different from his own culture as night was from day.

He was first assigned to Asia in 1990 and had, since then, made the rounds of almost all countries in the region.

Prior to his posting here in the Philippines, he was chair and chief executive of Nestlé Indochina, where he held fort in Thailand, and was managing director of Nestlé Singapore Pte. Ltd. prior to that.

During his earlier days with Unilever, he held various senior management positions that got him assigned to the Czech Republic, Indonesia, Malaysia, the Slovak Republic, and the United Arab Emirates.

Even after all those years in Asia Pacific, he admits that he still has a few surprises when he came to work in the Philippines.

"I’ve been visiting the Philippines for more than 20 years, but this is my first time to work here. The Philippines is fascinating because it has so many latent characteristics. It’s a very stimulating country. It has a diverse culture—more than many other Asean countries that I’ve been to," he relates.

It was mainly the people that set the country apart.

"In working with Filipinos, I’ve seen the passion of the people. The level of emotion, driven by passion and commitment, is extraordinary in the Philippines. That’s part of our success," he says.

Now on his third year in the country, Miller says he was still fascinated by the passion of the Filipinos, both those on the factory floors and those on the management side.

Working with such an able team—the best and the brightest in the industry—made his job so much easier, he says.

"During the recent visit of our CEO (Paul Bulcke), he was greatly impressed. He said I got the easiest job. The things I do here are fairly limited: I choose where to invest, I pick people to occupy certain positions, and I manage the external environment," he relates. "We have an extremely able team. We attract the best and the brightest people, and that makes my job a lot easier. We’re a company of individual leaders, but we work as a seamless team."

"As one of the many expats working here, we constantly learn about what works and what doesn’t work. We learn how to adapt. Here at Nestlé Philippines, I believe I learn more than I contribute," he adds.

Apart from the people, he adds that another thing unique about his Philippine experience was the fact that no two days were ever completely alike.

"I don’t have a typical day. No two days are the same. Here, it’s not like in the West where we like being structured and we know how our days will go. Many things happen that you can’t predict. It’s a combination of knowing what you need to do and the things that just happen. That makes my job such an exciting one," he says.

This made his work life so much more enjoyable—something that was particularly important, especially since there was no big division between his work life and personal life.

During days when he could get some non-work-related things done, he relates that he favored reading biographies, fiction, and business books, as well as running marathons. The last marathon he ran, however, was 10 years ago when his daughter Sophie was born.

Despite his hectic work schedule, he says he always had time for his family. Many times, his Malaysian wife Ying was also involved with the company, working with the wives of the other executives.

"We’re a tight-knit family (at Nestlé Philippines). I know that family’s very important in the Philippines," he says. "In Nestlé, we involve everybody. We’re a family company.

Article Type
News
To The Top