Over a hundred years after it first started operations in the country,  Nestlé Philippines, Inc. (NPI) today is a robust and stable organization, proud of its role in bringing the best food and beverage throughout the stages of  the Filipino consumers’ lives. The Company employs 3,700 men and women all over the country, and is among the Philippines’ top corporations. Its products are No. 1 or strong No. 2 brands in their respective categories. 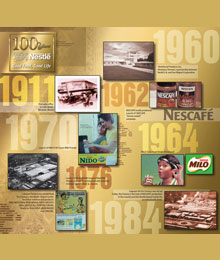 Although Nestlé products were already available in the Philippines as far back as 1895, it was not until 1911 when The Nestlé and Anglo Swiss Condensed Milk Company was established in the country, with its first sales office in Calle Renta, Binondo.

The Company was forced to suspend its operations during World War II, but soon made a comeback after Liberation, under a new name: Filipro, Inc. It continued to import products such as MILO, NIDO powder milk, MILKMAID and NESCAFÉ from other countries. In the early 1950’s, Filipro encountered difficulties when the Philippine government imposed import control. Due to lack of imported products to sell, it was forced to become a distributor of peanut butter, napkins, fruit preserves, and patis (fish sauce) just to keep its operations going.

In 1960, Nestlé S.A.and San Miguel Corporation entered into a partnership resulting in the formation of Nutritional Products, Inc. (Nutripro). In 1962, Nutripro’s first factory started operations in Alabang, Muntinlupa to manufacture NESCAFÉ. In 1977, Filipro, Inc. and Nutripro Inc. merged under the name Filipro, Inc. In 1986,  Filipro, Inc. changed to its present name as Nestlé Philippines, Inc. 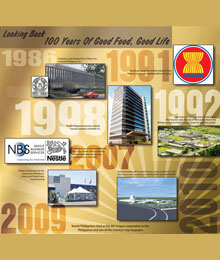 In 1991, Nestlé pioneered the AIJV (ASEAN Industrial Joint Venture), a regional complementation program.  The Company participated in this program with the production of breakfast cereals at the Nestlé Lipa Factory, for export to  ASEAN markets. Today, three of the Nestlé factories in the Philippines – Lipa, Cabuyao, and Cagayan de Oro -- serve as ASEAN Supply Centers to meet the requirements of Nestlé markets in the region.

In late 1998, Nestlé Philippines became a wholly owned subsidiary of Nestlé S.A., following the latter’s purchase of all of San Miguel Corporation’s equity shareholding in the Company.

Driven by its mission to nurture generations of Filipino families, Nestlé today produces and markets products under some of  the country’s well known brands  such as NESCAFÉ, NIDO, MILO, NESTEA, MAGGI, BEAR BRAND, NESTLÉ, and PURINA, among others.  Its product range has expanded to include coffee, milk, beverages, non-dairy creamer, food, infant nutrition, ice cream and chilled dairy, breakfast cereals, confectionery, and pet-care.