Nestlé Philippines recently celebrated United Nations International Youth Day 2018 at its various worksites, with its Makati Administrative Office hosting a “NesTalk” forum for young employees and trainees. The celebration was part of a continuing international initiative dubbed #NestleNeedsYOUth which seeks to help young people across the world develop skills and become more employable.

Youth in the Philippines are defined as those aged 15 to 29.

A stellar line-up of four youth influencers and leaders at the forum who provided inspiration in their talks consisted of Francis Sollano, a sculpture and installations artist noted for his creative reuse of materials into wearable art and a community youth leader engaged in environmental, youth and women empowerment advocacies both locally and internationally; Gretchen Ho, a former intern of Nestlé Philippines, a volleyball player and currently an anchor, segment host and field reporter for ABS-CBN programs including Umagang Kay Ganda and TV Patrol; Janina Vela, a highly popular, 18 year-old YouTuber whose channel offers beauty, fashion and inspirational videos which have drawn over 35 million visitors; and Catriona Gray, Miss Universe Philippines 2018 and Miss World Philippines 2016, a singer, martial artist, model, and an advocate for social justice affiliated with Young Focus, an organization which helps provide education and nutrition to the children of Smokey Mountain in Tondo. 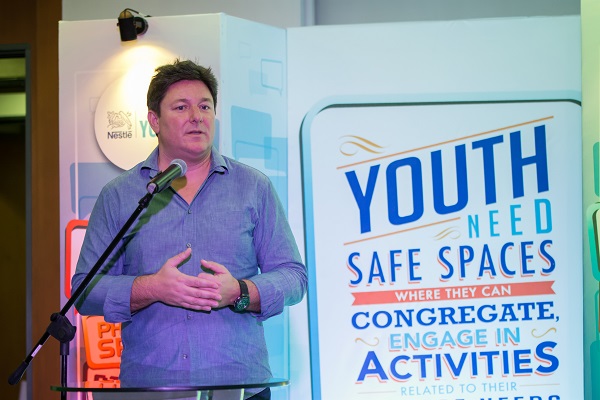 “Youth is really when you start gaining new experiences and start making your mark in the world. When you think about what is really important in a person, what really differentiates one person from another, what makes a person more successful, I think it is character,” said Nestlé Philippines Chairman and CEO Kais Marzouki in his opening remarks.

In his talk on civic spaces, Cebu-based Francis Sollano, whose advocacies include addressing the problem of trash in the community, spoke about his pioneering work in creating “trashion,” combining trash and fashion. He has mounted a “trashion” show of his own featuring wearable art during New York Fashion Week. The impact of his work is such that during the next New York Fashion Week, some designers dropped sponsors who did not comply with their requirements for sustainability. In addition, Francis collaborates with a local group of creative talents working for positive change in society. The group’s initiatives include saving rivers and a successful movement to oppose a coal-powered plant in Cebu City. Concluding his talk, he asked, “How are you able to make your passion create positive change in society?” 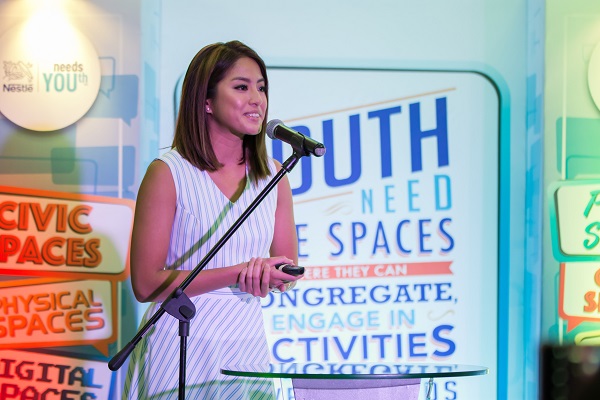 Speaking on public spaces, Gretchen Ho shared her experiences of learning commitment, resiliency, adaptability, teamwork and humility as a star volleyball athlete. She described her internship stint for MILO at Nestlé Philippines seven years ago as a life-changing experience that opened her eyes to new possibilities, and singled out the sense of family at Nestlé as a valuable takeaway. One’s real goal should be to grow -- “Most of us are afraid of change. It takes courage to want to change,” she said, adding that the secret of conquering fear is not to overthink it but to go for it. “Most of all, I want to emphasize integrity, being true to yourself, being true to your word. For sure you will be a winner,” Gretchen said. 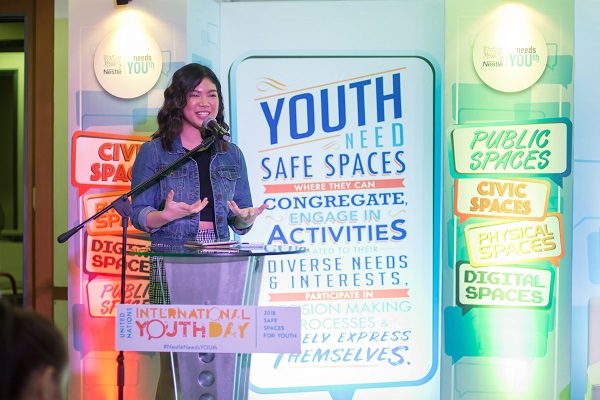 On the subject of digital spaces, Janina Vela emphasized that there is value in being present, that it makes an impact on other people. “Social media has the power to affect someone else’s day,” she said, relating how two girls at the mall told her how she inspired them through her videos. But being on social media also attracts haters. How does she deal with this phenomenon? Janina said, “Blowing out someone’s candle won’t make yours shine any brighter. Lighting someone else’s candle won’t cost you anything either. You dictate how you affect social media.” She highlighted the importance of approaching social media as a platform and not as a pedestal. At the end of her talk, she said, “Whatever hat you wear, be the change you want to see in this world. Change starts with you.” 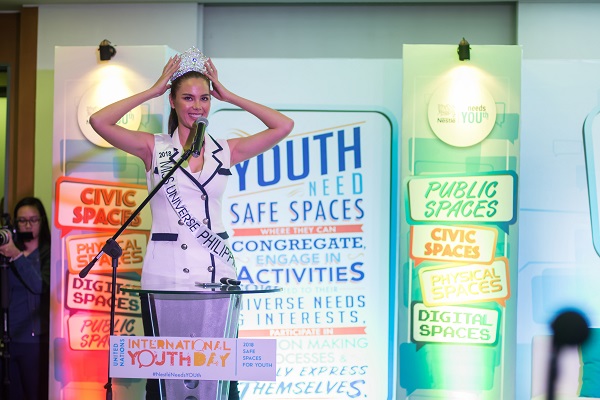 Catriona Gray, on the topic of physical spaces, spoke about her advocacy and volunteer work with children in Tondo as part of the process of humanizing the world around us. She quoted Anglican Bishop and Nobel Prize winner Desmond Tutu of South Africa: “You show your humanity by how you see yourself not as apart from others but from your connection to others.” Drawing on her experiences with Tondo children, she said that each child represents untapped potential. “Can you imagine what kind of world it would be if every child could achieve his full potential?” she asked, adding that education is the most empowering force in the world. “Education also saves lives,” she stressed. Catriona suggested that Nestlé Philippines look to the youth such as those in Tondo in its efforts to reach out to young people. 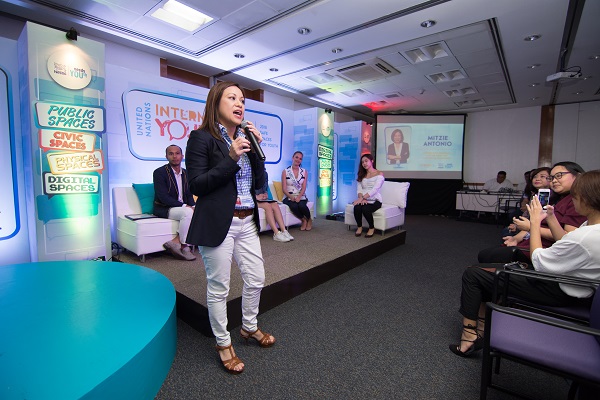 Closing the forum, Nestlé Philippines HR Director and SVP Mitzie Antonio said:  “Let’s use this day to remind ourselves of what Nestlé is all about, that we are a company driven by a purpose, that is enhancing the lives of the people that we serve, that we are always guided by our values, rooted in one word, and that is respect. That respect must start with our selves, respecting others, respecting diversity, and respecting the future.”